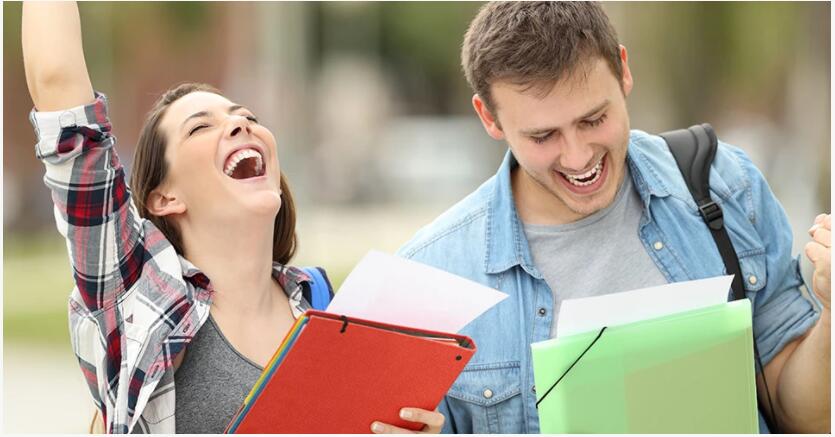 The GMAT has specific scores for each section. How do I know what a competitive GMAT score is? Without a doubt, the most important sections for evaluators of your admissions process are the verbal section and the quantitative section. This is not to say that the AWA and IR section have no relevance in the process, but rather that in general it is the other two sections that provide the admissions committee the most information. In addition to giving you a score, GMAC gives a percentile of your score. Based on all the GMAT exams taken in the last 3 years, the percentile will indicate the number of people who have a lower score than yours. Next, we will give you more details of your evaluation.

The analysis you write will be evaluated in two stages. In a first phase, the information system will evaluate how well structured your ideas are, your grammatical level, your vocabulary and part of your analysis. This will give a grade. Afterwards, a properly trained evaluator will review and give a grade on the quality of the essay, analysis, writing and your reasoning process. If the scores of the two differ by more than one point, there will be a third examiner who will determine the final score. Otherwise, the simple average of both assessments will be your final score. This part is evaluated from 1 to 6 (in progress of 0.5 points), in such a way that the essay is extraordinary if it has a score of 6, and deficient with 1. This is the only part that, for a fee, can be reevaluated. . This reevaluation is final, and may benefit or harm your previously obtained score.

As of 2018, the GMAT AWA score percentiles are as follows:

While no part of the exam should be answered lightly, this section is the one that typically carries the least weight in your application. Verbal-quantitative scores, your GPA, and even your essays, will have a higher evaluation in the process. What could be detrimental is obtaining scores below 3.5 in this section, since it indicates poor quality of analysis and writing, which is necessary to be academically successful in graduate school.

According to topschoolsintheusa, a GMAT score of 3.5 is very low (11th percentile). However, as a Spanish speaker, especially if you studied for a degree in Latin America, it is not a score that warrants repeating the GMAT.

As part of your admission process, you will have to take the TOEFL or IELTS, where your writing level will also be measured. Therefore, you have another element to demonstrate your level of writing. If your TOEFL writing score is higher than 25 points or higher than 7 on the IELTS, even if your AWA score is 3.5 or 4, the admissions committee will consider these scores in your favor. Thus taking weight off a low AWA score.

The newer part of the test has four types of questions, each with different sections. These are evaluated automatically, which means that a person is not needed to review your exam, as in the case of the AWA section. Each exercise presents several answers and to get a good exercise, you must answer each of the parts of the problem correctly. If, for example, for the exercise you have one of the possible answers, good, but the others, no, you will not be awarded a partial score. This section is not problem adaptive , that is, the difficulty of the questions is not adapted to your performance. The exam can throw you easy or difficult questions, regardless of whether you answer the above questions right or wrong. Some of the problems in this section are experimental, which is why they will not add to your total score. Hence, despite having 12 exercises, this section is evaluated from 1 to 8 (in one-point increments). Although the exercises are not problem adaptive , this does not mean that all problems have the same value for calculating your final score. The evaluation algorithm is not public information, however, each exercise will have a different weighting.

As of 2018, the percentiles and GMAT Integrated Reasoning score are as follows: 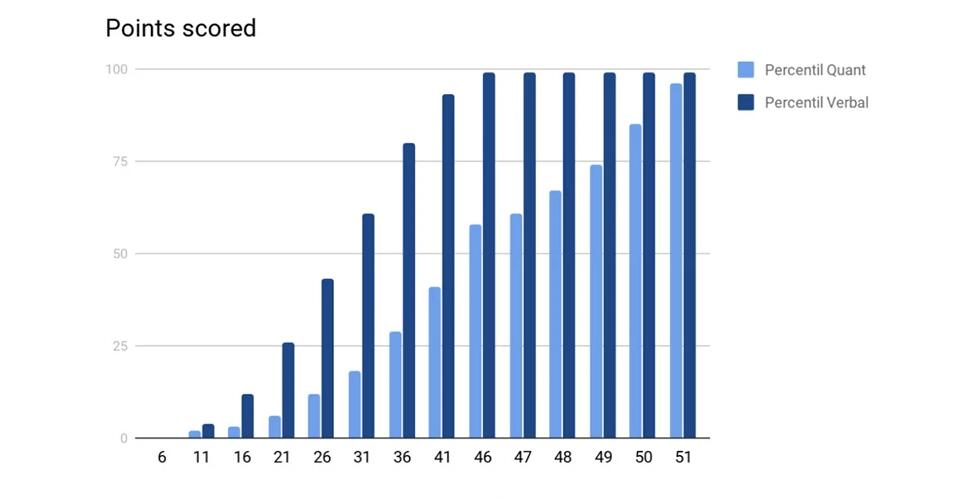 This section has become important in recent years, and more and more recruiters give it greater weight in the admissions process. This is due to the fact that, at present, an ability to analyze large amounts of data quickly is required, and to be able to draw conclusions and make decisions based on them. This aptitude is appreciated by universities and is extremely necessary both in graduate school and in working life. While the verbal and math parts indicate how good your reasoning is at solving paper problems, Integrated Reasoning will be the way to assess how good you use the two skills together to solve problems closer to reality. Although this section has become more important in the admission process. It is still less important than the other two sections: verbal and quantitative.

In fact, most MBAs for example, although they publish and boast the average score of their accepted students on the verbal and quantitative section of the GMAT, this score does not include either the AWA section or the Integrated Reasoning section.

These two areas are evaluated similarly. They are areas whose problems are adapted according to your performance, according to greater or lesser difficulty. The 4 sections of quant and verbal together are those that give the general qualification of the exam. This will be discussed later. Separately, each one is presented in your report with a scale from 0 to 60, with the most common scores between 6 and 51. Remember that it is not a simple average of the answers you have, but a weighted according to difficulty and others related factors. This, based on a methodology called “Item Response Theory”, supported by mathematical models that allow the computer to evaluate your level in a more objective way.

As of 2018, the percentiles and GMAT scores for verbal and quantitative are as follows:

The GMAT score is the result of a weighting of the respective qualifications of the quantitative and verbal section. This will go from 200 to 800. Originally, this scale was planned in such a way that 500 will represent the mean of the score, with a standard deviation of 100. Thus, following a Gaussian bell, 68% of applicants would obtain a score between 400 and 600; 95% between 300 and 700; and, on the test, it couldn’t be outside of 3 standard deviations. Currently, due to the great competitiveness and the preparation of the supporters, the average is already 556 and the standard deviation 120. This score measures the difficulty of the questions that were answered overall. For example, if you see a math problem that says “700-800”, it means that these types of problems will appear on the test if the difficulty is high (700-800 are the most difficult questions, as the highest score is) .

As an aspirant, your intention is to get the highest score, and correctly answer the most difficult problems.

This is the grade that carries the most weight in the admission process.

As of 2018, these are the scores and percentiles of the GMAT score:

One of the advantages of a score being a mixture of verbal and quantitative is that a specific one can be accessed in different ways. For example: Let’s imagine you need a score of 700 for a University. If you are very good in both areas, but not excellent, you can get this score with 43 points in both sections (47th percentile in quant and 97 in verbal). However, it may be the case that you are excellent at math, but not great at verbal. You can still have 700 points with 50 qualification in quant (perc. 85) and only 37 points in verbal (percentile 82). Finally, if mathematics is not your thing, and English is given to you, you can reach 700 with the opposite case: 99th percentile in verbal and 29th percentile in mathematics (scores 50 and 36 respectively). 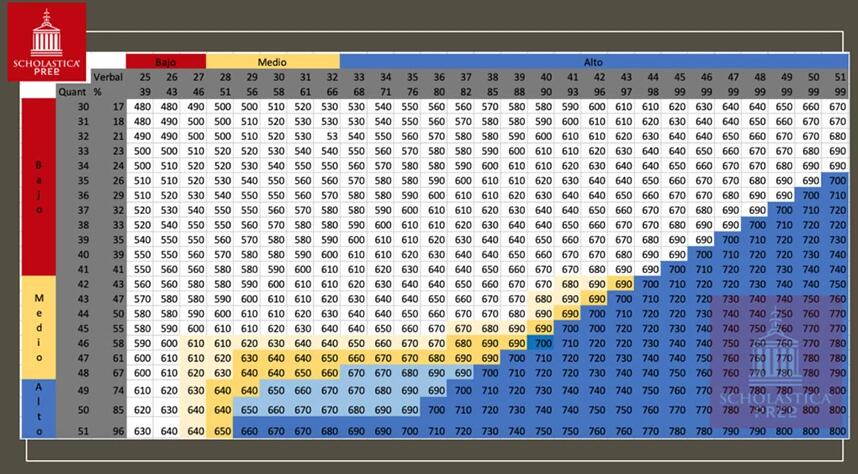 What GMAT scores are competitive for your graduate degree?

Once the GMAT score is determined , take a look at the average scores of those admitted to the best universities in the world for their MBAs:

As you will see, the more competitive the MBA or graduate degree is, the higher the average score of those who are admitted. In general, an assessment below 600 is seldom competitive in these business schools. And achieving this is difficult, especially for Spanish speakers, due to various factors ranging from the native language, heuristics or thought processes acquired from childhood both at home and at school, to culture and representative worldview.